New on Campus, introducing some new plants in our landscape

Introducing some new plants in our landscape

The plantings around our campus are a mixture of native and introduced species, and they are all chosen for their ability to thrive in this climate, and to look as if they could be native. This summer we are planting more area than any year since I began working for UAS, and the core area around the Spike statue is one of the nicest. This arc of radiating bands focuses on the central star of the new amphitheater area, and standing there it leads the eyes to follow the larger landscape features of the central campus.

The species chosen for this planting are designed to provide interest through the whole year, some are evergreen, some will lose their  leaves after changing color in the fall, some bloom early, some late and when we get a couple of years into the project it should be a real treat to visit.

Spike himself rises through a mass of Japanese Yew, which will be trained as an undulating evergreen mass reminiscent of the ocean surface.   We planted it with a mixture of sizes of plants so the irregular surface effect would be seen immediately.

Spike in a Sea of Green 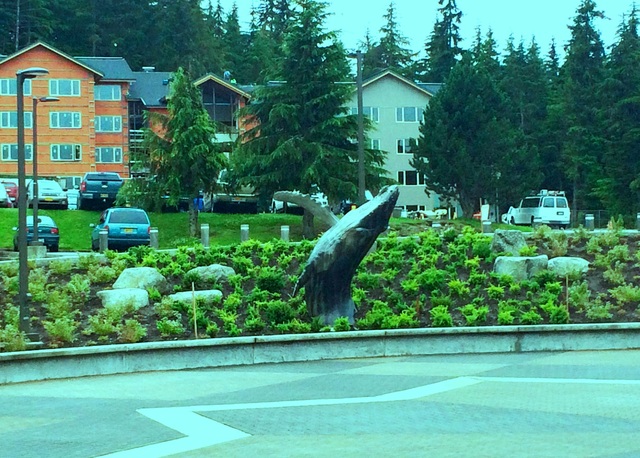 Japanese Yew is a great evergreen for our zone, and this particular one,”Densiformis” is one of the best of those. It is hardy, moisture tolerant, and adaptable. We will be trimming it into a series of wave patterns like the famous “Cloud Plantings” of Japanese Gardens.

On either side of the Yews are a new Spiraea named “Glow Girl” from the breeders in Norway. It’s bred from one of our native Alaskan species, the Birch leaved Spiraea. This one is a further refinement of the one of our favorites named “Tor”, which is planted around the lawn below the Hendrickson Building. The fall color of the “Tor” is so eye catching that when a golden leaved version was announced last year we ordered some from the first North American crop available. 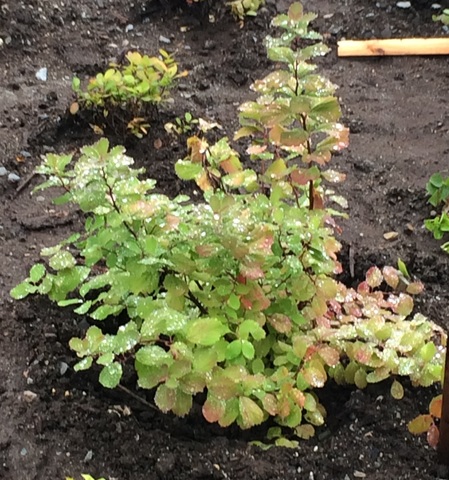 Immediately after these “Glow Girl” Spiraeas we planted another Japanese inspired selection. These are a pair of dwarf Rhododendrons called “Yaku Prince” and Yaku Berg”. These incredible little work horses have been bred from Rhododendron yakushimanum, a wild species from the islands of Northern Japan.  In the early 1900’s a Japanese nurseryman named K. Wada sent some selections from the wild to Lionel, Baron Rothschild in Britain. Baron Rothschild was one of the most prolific Rhododendron and Azalea breeders in the history of the world, and he recognized the worth of these immediately. The low mounded form and hardiness are only the beginning. Their emerging leaves are covered with a white furry powdery substance called indumentum, making them look like something entirely foreign on top of the regular deep green foliage. It is an insulating layer that helps the tender baby leaves resist the cold winds of the early spring. They have full sized leaves, and full sized flowers, but the shrub stays under 4 ft and does not break up under the show weight. The colors are pastels, deep pink buds opening to soft pink and changing daily as the flowers mature. 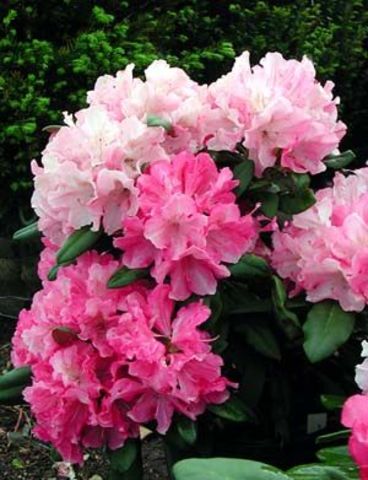 Next is a plant from the other end of the breeding spectrum. It’s an antique Rugosa Rose named “Blanche Double de Coubert”, bred and introduced in 1892 by the famous French breeder Scipion Cochet-Cochet. Rugosa roses are the group that includes the Sitka Roses that we planted last summer on the slope at the other side of the Plaza. They are incredibly tough, and have big beautiful fruits in the fall called “Rose Hips” 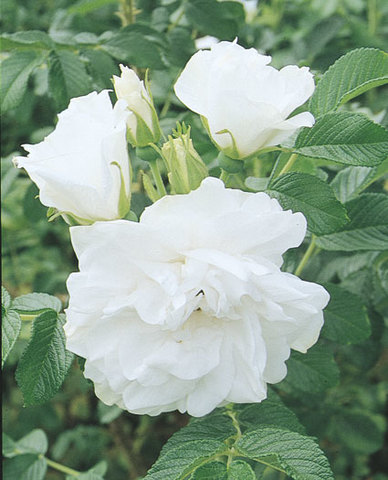 Blanche develops into a fully double pure white extremely fragrant flower that is still, more than a hundred years later used as the role model against which all other white roses are judged. She also turns the most beautiful shades of gold and orange in the fall, and her deep red hips are like plums glowing in the autumn sun. She would get 4 ft tall so we will keep pruning her to keep her inscale with the other species, but since she does not spread like her Sitka Rose parents, we will not have any problem doing this.

We underplanted the roses with Creeping Dogwoods, our native forest edge favorite. They will spread around and bloom in June and July each season. They also have a spectacular fall color show, and delightful dark red berries.

There are more species to be planted, and I will post about them as they get into the ground. If there are questions about any of these, or general questions about 6the campus landscape, please email them to dwlendrum@uas.alaska.edu